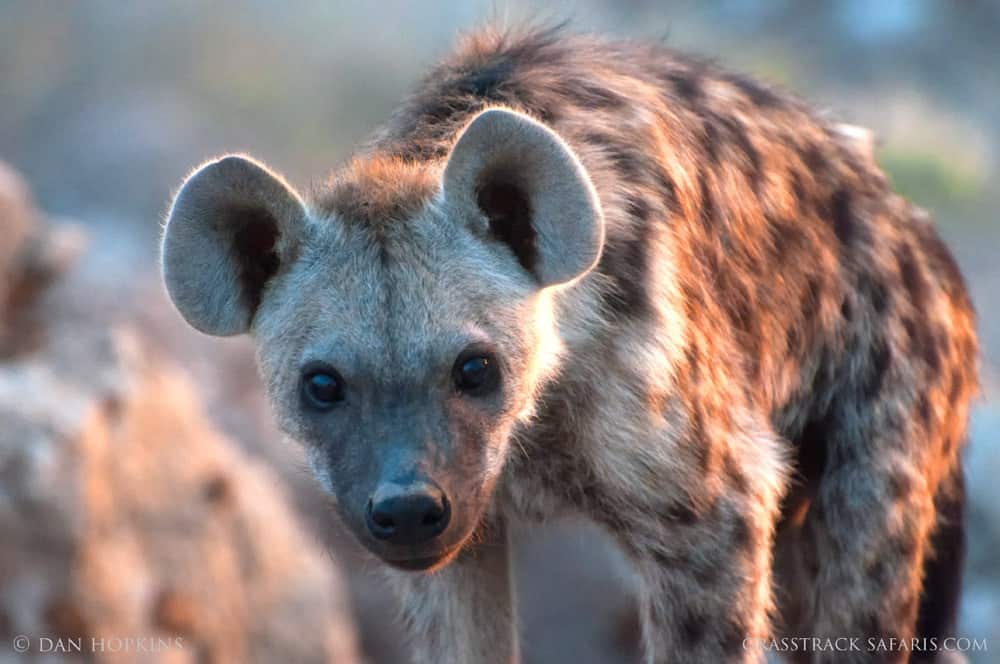 Here's great story about camping in the Botswana wilderness by one of our clients, recently returned from our Botswana Culture & Wildlife Safari.  Author and safari host, Bonnie Fladung, tells an unforgettable story of an unexpected nocturnal visitor to her tent one night deep in the Botswana bush!

I heard something brush against the outside tent flap, then soft breathing, like heavy sighs. Just a few inches from my sleepy head, an animal lay down. Fear gripped me and I started to panic-breathe.  The only thing that separated me from danger was a few millimeters of canvas secured by zippers.

I was luxury camping in Africa, which meant I had a canvas outhouse area attached to my tent. It housed a long drop toilet and a bucket shower, and was fastened together by Velcro so the staff could service it. I accessed it through the zippered door on the back of my tent. The creature had snuck in through an opening in the Velcro, and decided to spend the night on the mat near the zipper. Near my head. Lioness with an impala carcass

We were camping in Moremi Game Reserve situated on the Okavanga Delta in Botswana. Named one of the “Seven Natural Wonders of Africa,” the Delta is one of the best places to view a wide variety of wildlife. On the way to our campsite, we had seen a lioness on the hunt. Pouncing amidst the reeds, she had startled a porcupine, which scurried off and successfully lived to see another day. In our 4x4 vehicle, we continued to follow her until she located a impala carcass several days old. The mature lioness, once a powerful huntress, now scavenged for her meals.

The smell of the rotting flesh was overwhelming. I had turned away, and my seatmate Kelly sensed my disgust. Kelly was a medical doctor and the previous evening she had joked at dinner that she had met her husband over a dead body. So she was no stranger to corpses.

They say it’s important to choose your traveling companions wisely, and I had lucked out having Kelly and her husband on the trip. We shared a sense of adventure and humor. The other travelers in the group got along well, except sometimes when it came to meal selections. You were asked to specify your food and drink preferences on the pre-trip form, like whether you were vegetarian or non. But even though people occasionally forgot, there was always more than enough food to go around and no one went hungry.

The image of the non-vegetarian lioness, ripping at the rotten flesh with her nearly toothless jaws, passed through my mind as I lay on my cot in the dark.  Was that same lioness just outside my door, looking for an easy meal? No, judging by the size of the opening where the Velcro didn’t seal, this animal was smaller. Sneakier.

It had to be a leopard. Not far from the impala carcass, we had spotted an adult leopard lazing high up in the trees. The guide surmised that the impala kill had been his, and the lioness had preempted his meal. Maybe that leopard was looking for fresh meat, in my tent. A leopard. Now that would be the way to go. Instant death by fangs into the jugular. Better than being mauled to death by an ancient toothless lioness… The leopard spotted near the impala kill

Or maybe it was a snake. A snake could slither through small spaces and they were known to climb into warm beds. But wait. A snake doesn’t pant. I needed to calm my mind and think rationally. Whatever was out there could probably sense my fear. I needed to control my breath, so I matched my breathing to its. Breathe in, breathe out… Calm down.

Should I scream out and wake the staff and my fellow travelers? But wait. I wasn’t in any immediate danger. Why disturb and worry everyone. The advice was to stay in your tent. You’ll be safe in your tent. No one gets attacked in their tent.

If the animal starts pawing at my tent, then I will scream. And had I secured the zippers? The tents were new and the zippers were difficult to manipulate. What if I had left a tiny opening, small enough for the animal to poke its nose through? Maybe I should be prepared to kick it in the face. With my bare feet? Or should I put my boots on? What if my movement to find my shoes spurred it into action? I remained still and quiet, listening.

It was very dark outside. A “Black Moon” as they call it, when two New Moons occur in the same month. In the deepness of a night such as this, some animals like foxes are warier of the larger predators, and perceive a measure of safety in the presence of humans. Maybe this critter was taking refuge near me. Maybe we were sharing a shelter together. Wishful thinking.

The heavy breathing from deep in its throat reminded me of the animal’s presence. I was glad that I had listened to our guide about timing liquid consumption in order to minimize time outside the tent at night. I did not have to use the toilet, yet. Maybe one of my fellow travelers hadn’t heeded his advice, and would unzip their tent to use the facilities. Lure the animal away. Maybe they would be its next victim. Gruesome thoughts. Bizarre wishes. Survival instincts. In the wild, you only need to run faster than the person behind you. I spent a long night waiting for stirrings from the camp staff. When they finally appeared, bringing a basin of warm water, I asked them to search behind my tent. Nothing there. Whatever it was had disappeared into the night as silently as it came. They searched for tracks. Probably hyena. It must have been the hyena they had spotted hanging around camp after we went to bed.

At breakfast, I relayed the story of my suspenseful night to my fellow travelers. My friend Kelly sensed my disappointment that it was only a hyena. They have a misguided reputation as scavengers and superstitious ghost spirits. In the travel writings of Ernest Hemingway, he called it the “potential biter-off of your face at night while you slept.” In reality, this creature of the night with its bone-crushing teeth rarely attacks humans and is highly intelligent. Its notorious laugh signals the other members of the pack that it has found food. It hadn’t been whooping and calling in my tent, so maybe it just stopped by for a little R and R.

“Are you disappointed it wasn’t a leopard?” Kelly asked.

“Well yes. After all, I had specified on my pre-trip form that if I die in Africa, it would be in the jowls of a leopard,” I joked. “Not a wily hyena. That wasn’t even a close second.”

Kelly laughed. “Let’s all agree that if anything happens to you, whether by hyena, snakebite or tripping over a rock, your obituary will say ‘Death by Leopard.’ “

That evening, we gathered around the fire as a sliver of moon ascended. One of the kitchen staff approached our guide and whispered excitedly, instructing him to grab his torch. About 10 meters from camp, he aimed the beam at a termite mound. Perched majestically, a juvenile leopard peered back at us. Waiting… Watching…

I’d like to believe that this was my mysterious night visitor. But I will never know for sure…

Bonnie J. Fladung specializes in nonfiction and adventure travel writing with a focus on nature and wildlife. She is the co-author of the award-winning book "When Eagles Roar: The Amazing Journey of an African Wildlife Adventurer" which focuses on African wildlife, community relations, environmental concerns, and the impact of AIDS in Africa. The book was recently selected as "One of the Best Wildlife Books of All Time" by Book Authority, and “What to Read Before You Go” by National Geographic. The first book in her new illustrated picture book series “The Elephant’s Euphonium: A Little Tusker’s Adventures in Africa” brings attention to the plight of the remaining large tuskers in Africa. Bonnie also teaches courses on Africa with a focus on wildlife through the OSHER program at Dartmouth College. To learn more, visit Bonnie's website.