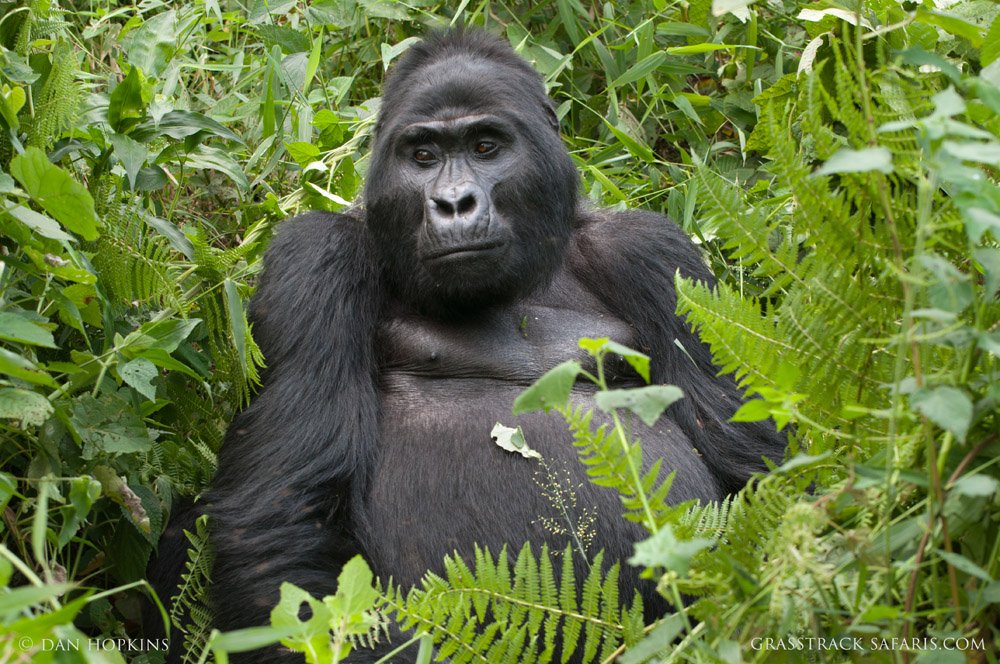 Uganda offers more than gorilla trekking!  Indeed it is truly a destination for everyone.  It is a country of vast diversity, offering the highest mountain range in Africa, the magnificent Great African Rift Valley, the mighty Nile River, the second largest fresh water lake in the world and the famous and remote Murchison Falls.  However, Uganda is most famous for it’s accessible population of mountain gorillas.  With a global population of about 880 individuals, Uganda is home to about half of the world’s population of this critically endangered primate.  The remainder live on the volcanoes in Rwanda and the Congo.  Gorilla trekking through the rain forests of Uganda to see these rare primates is a profound wildlife encounter and one not to be missed!

Bwindi Impenetrable Forest lies in the far southwestern corner of Uganda and hosts about 10 habituated gorilla family groups, each led by a dominant male, the silverback. They’re enormous animals growing to nearly 400 lbs and standing up to 6 feet.  Gorillas tend to feed and nest on the ground and don’t wander too far so the chance of seeing them is high (95%).  The habituation process can take 2-3 years as each group is visited daily by researchers until they become used to the presence of humans.

A gorilla trek is led by a game ranger and three trackers.  The trackers leave early in the morning to locate gorilla nests from the previous night and then track them to their current location.  Once they are located, they radio the guide who then leads the tourist group up to the gorillas.  These are wild animals so there is no typical day.  Treks can last from 1-6 hours and follow established trails or through the dense jungle.  The unpredictability and the opportunity to spend an hour with wild gorillas makes this a true adventure! Into The Impenetrable Forest

I’ve been anticipating this day for the past few months and it has finally arrived.  On the morning of our gorilla trek we gathered at the Park Headquarters and met our guide.  We would be searching for the Rushegura group with 1 silverback and 17 members (a new infant was born into this group on Nov 11, 2016, just a week after our visit).   This group tends to stay in the vicinity of Buhoma village so we only had a short drive to the trailhead.  Having hired porters to carry our packs (and provide some income to the local villagers) we headed up the trail.  Passing through fields and along small farms, we were soon hiking up the steep slopes and into the Impenetrable Forest.

As we hiked along, the forest closed in and the name “Impenetrable Forest” became abundantly clear.  The trail led through thick greenery of ferns, twisting vines, and gigantic fig trees.  Birds called from the dense vegetation.  We frequently stopped to catch our breath and take in the dramatic scenery unfolding below us.  A we reached the ridge top our guide informed us the gorillas were still on the move so we continued down the other side of the mountain.  The trail now bordered along a cultivated area and the gorillas were finally settled down on the edge of the forest.  We were very close now. Leaving the established trail, we followed our guide as he hacked a path through the dense vegetation.  The terrain was steep and slippery as we pulled ourselves up the “trail”.  We stopped in an open area when we realized we were surrounded by gorillas.

At first they were hard to see as they lazed in the thick growth feeding on stems ripped from the ground.  Though we tried to maintain the legal distance of 7 meters from the gorillas, they ignored the rules.  One adult walked past our group, so close you could’ve reached out and touched it.  After a frenzy of taking photos, I decided to put the camera down and absorb the experience of being in the middle of a gorilla family.  I watched as juveniles climbed on vines and played with the uninterested adults, as gorillas groomed each other in a patch of sunlight and as the big silverback fed contentedly while keeping a watchful eye on his family.

The hour passed by all too quickly.  As we left the gorillas I thought about the intense conservation challenges facing gorillas in modern Africa and what their future holds.  It was a privilege to spend a surreal hour with them, an experience few people have enjoyed.

We descended the mountain and the reason this is a rain forest also became abundantly clear as a tropical thunderstorm soaked us with torrential rain.  But all that didn’t matter as I had just experienced one of the world’s premier wildlife encounters.