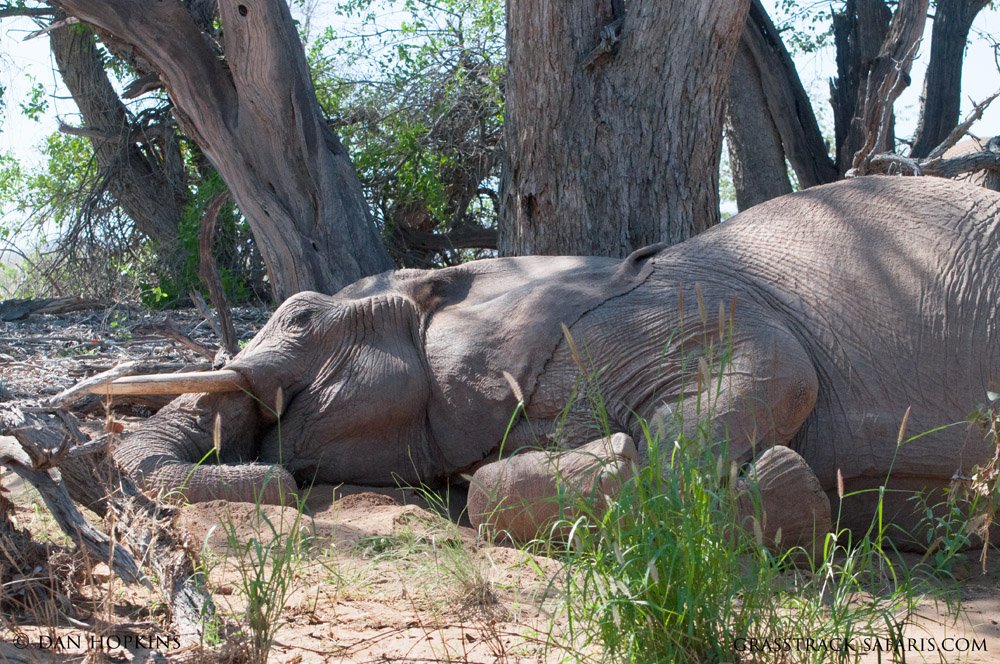 Namibia is an arid country and receives little rainfall throughout the year.  The Namib Desert, which hugs the entire coastline is one of the driest places on earth.  It's a hostile environment of dunes, gravel plains, and treeless hills, yet elephants can be found here.  It seems like an impossibility since elephants consume large amounts of vegetation and water.  However, against all odds, elephants have learned to survive in this rugged environment.  In fact Namibia’s desert-adapted elephants are only one of two such populations in the world (the other population is in Mali, on the southern fringes of the Sahara).

This population of elephants is not considered a separate species from the well-known savanna elephant, but an ecotype that is behaviorally adapted to survive in this challenging habitat.  They are physically similar to other elephants in southern Africa but over generations have learned how to survive this harsh environment.  They essentially never leave the Namibia so are considered “desert-adapted” elephants.  There is evidence that bulls will migrate to the Etosha area, suggesting some level of gene flow between the desert population and the Etosha population. The elephants that inhabit the Kunene and Damaraland regions of north west Namibia depend on the dry river beds that run south west from the interior to the Atlantic Ocean.  Family groups of elephants will wander for miles along (and between) the Ugab, Huab, Hoanib, and Hoarusib Rivers searching for food and water.  Though these rivers may only flow for brief periods during the year, water can be found just below the surface.  The dry river beds act like “linear oases” supporting the growth of trees, grasses, shrubs, and other vegetation the elephants depend on for food and shelter.

Elephants dig wells to reach the groundwater making the otherwise inaccessible water available to antelopes, rhinos, and birds.  When they congregate in the dry river beds their dung can help fertilize the soil and adds to the litter mass where the seeds of Camelthorn and Ana trees are likely to germinate.  Research shows desert adapted elephants are less destructive and wasteful then their savanna relatives.  They seldom topple trees and frequently browse on regrowth from previously damaged trees. They also debark fewer trees than elephants elsewhere.

The Kunene region receives less than 100mm per year so the elephants need to migrate long distances in their never ending quest for food and water.  Elephants can consume up to 500 pounds of food a day and 40 gallons of water and in such an arid environment they are on the constant search for food.   However, desert-adapted elephants can go without water for 3-4 days. Distances between water holes and feeding areas can be as much as 45 miles and home ranges are about 500 sq miles (eight times larger than elephants in central Africa where rainfall is much higher).   Constantly on the search for fresh food and water, they journey between river courses and into the harsh Namib where they cross sand dunes, gravel plains, and rocky hills. Historically the desert-adapted elephants ranged throughout northern Namibia and into Angola but their numbers have dwindled over the years from poaching and habitat loss.  Following independence, Namibia embarked on a bold conservation program to stop the decline of its wildlife.  Their communal conservancy program allows local people to share in the benefits of tourism providing an incentive to protect wildlife.  Local communities have partnered with private safari companies and the government to establish lodges on communal properties.  The local people share in the profits and find employment as lodge staff and guides.  A number of lodges in Kunene and Damarland now offer game drives in the nearby river valleys to look for the desert elephants.

We stayed at the Damaraland Camp and spent a morning searching for elephants along the dry Ugab River.  The small herd we eventually found proved an interesting site.  We came upon about 20 elephants, all of which were sleeping on the ground in the shade of the acacia trees.  Occasionally one would lift its head, stare at us for a minute, and go back to sleep.  It was a surreal experience spending time with these elephants and thinking about how they can survive in this extreme environment.  A quick glance around reveals an abundance of shrubs, grasses, and tall, shady trees.  These dry river beds truly are the life-blood of these desert-adapted elephants.

Interested in searching for desert elephants?  Join our Namibia Adventure Safari.  You'll look for the desert elephants, track black rhinos on foot, visit the Himba, and see why Namibia is such a unique safari destination.