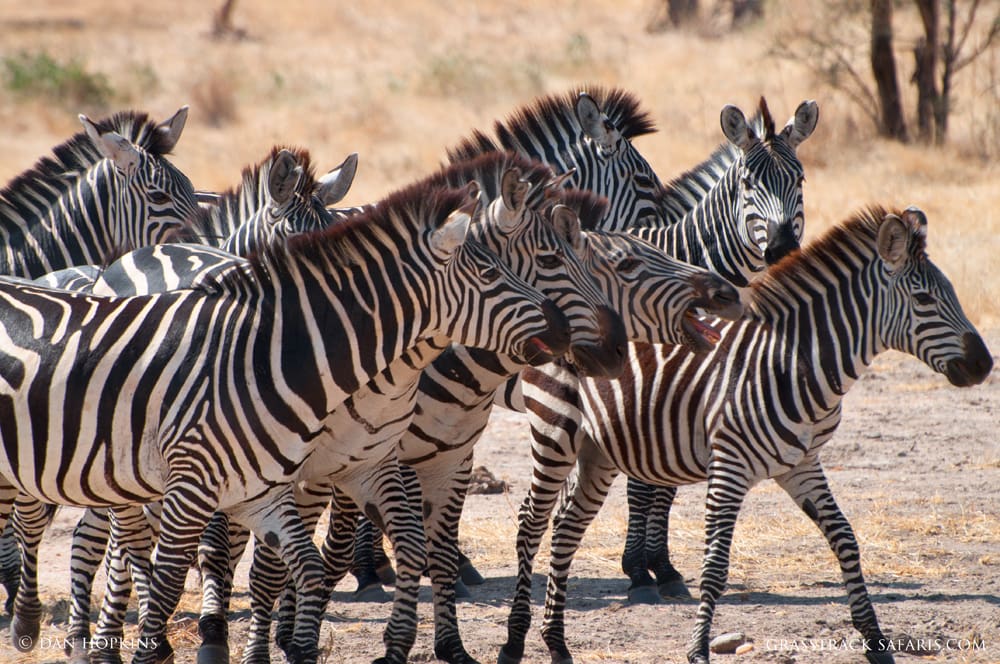 Here’s the second installment of my report from our Southern Tanzania safari I hosted in September 2018 (you can read Part 1 here).  Throughout our journey, I was amazed at the diversity of landscapes, people, wildlife, and birds we encountered.  We covered long distances driving from the coast into central Tanzania.  Along the way we passed through small villages, hiked in lush rainforests to a spectacular 300-foot waterfall (and had a quick swim), drove over high mountain passes, walked in the bush and wandered local markets, lost our way in Zanzibar, encountered elephants, wild dogs, and loads of other wildlife, and fell asleep to the roaring of lions.

The Drive to Ruaha

The morning after our Mikumi safari, we hit the road for the long drive to Kilimatonge Camp deep in the bush of Ruaha National Park.  We followed the main road from Mikumi to Iringa and then back to the dusty dirt road to Ruaha.  As it’s the only major road from the coast and across central Tanzania it was crowded with slowly moving large trucks and buses and without much opportunity to pass slow vehicles, the drive took longer than expected.   The road passed through many small villages requiring you to slow down and to avoid a speeding ticket.  However, the scenery and landscapes were beautiful.  We climbed over narrow mountain passes and valleys filled with abundant baobab trees.  Each village and small town provided a glimpse into rural African life.  Upon arriving in Iringa, we left the main road and followed the seemingly endless dirt road to Ruaha, stopping under a baobab for a picnic lunch. The Road to Iringa The Never Ending Road to Ruaha Ruaha National Park, wild and untrammeled, is Tanzania’s largest national park. The park occupies an important transition zone between southern and eastern Africa species making Ruaha one of the most biodiverse parks in east Africa. With surrounding game reserves, Ruaha forms the core of a much larger wilderness of nearly 60,000 square miles.  Ruaha itself protects 7,800 square miles of a wide range of habitat including rocky hills, open plains dotted with enormous baobab trees, and seasonal wetlands that drain into the Great Ruaha River.

The elephant population of Ruaha is the largest of any Tanzanian park, with about 12,000 elephants.   We will see plenty of giant tusker’s dust bathing, crossing the river system, and gathering in enormous herds.  Ruaha also ranks with the Serengeti for big cat sightings.  Lions are numerous with many unusually large prides, often numbering more than 20 individuals.  Leopard sightings are common, particularly in the area around Kilimatonge Hill. It is also one of the few places in Africa to support a viable population of the African wild dog. If you’re looking to immerse yourself in the wild, remote bush Ruaha is the place.  We stayed at the Kilamontage Camp, a private, seasonal tented camp at the base of Kilimatonge Hill.  The tents were very comfortable with beds and a private shower and toilet attached to each tent.  The small staff were incredibly friendly and professional, preparing delicious meals, and keeping our gin and tonics full as we enjoyed the campfire.  Lions were frequently seen near camp and every night we'd fall asleep to their roaring calls.


Our 4 days here were full of activity.  Our guide would take us out all day to search for game and we saw an amazing diversity of birds and wildlife.  One memorable sighting was spending some time watching a herd of elephants drinking and bathing in a dry river bed.  They would dig through the sand to find clean water and then roll in the mud to cool off.  We saw many lions (and heard many in camp at night) including a small pride feeding off a recent giraffe kill.  The rocky terrain around camp seemed perfect leopard habitat, but we never did see one.

For me, the highlight of our Ruaha stay was the morning bush we did with the park rangers.  We started high above the Ruaha River and then walked down to the river and followed it for a few hours.  The rangers had incredible knowledge of the bush and they showed us many medicinal plants, discussed bush ecology and wildlife biology, found us insects (and even a dove’s nest with eggs) and told us local legends and myths about the area. Lions Resting at their Kill Our time in Ruaha passed quickly and then it was onto our next destination, the Udzungwa Mountains.  We retraced our route back to Iringa and spent a little time wandering the local market stalls filled with nuts, fruits, vegetables, dried fish, fresh fish, a variety of meat, and baskets of colorful spices.    After buying some sugar cane and candy made from baobab fruits, we continued our drive to the Udzungwa Mountains.

Udzungwa Mountains National Park is small by African standards (770 square miles) but makes up for lack of size with stunning scenery, rainforest cloaked mountains, and an amazing diversity of plants and animals.  The Udzungwa Mountains form part of the Eastern Arc Mountain Range, one of the oldest mountain ranges in Africa and supports some of the most ancient and diverse biological communities in Africa.  The Eastern Arc is famous for their high degree of endemism – covering less than 2% of Tanzania but more than 50% of the country’s plant and animal species.  Over 300 endemic animals and over 800 endemic plants have been found in the Eastern Arc.  The Udzungwa Mountains form one of Africa’s most remarkable biodiversity regions and walking them is a memorable experience.

The Udzungwa Mountains is a primate hotspot with twelve species, five of which are Tanzanian endemics (the newly discovered Highland Mangeby, the Sanje Crested Mangeby, the Udzungwa Red Colobus, the Matundu Dwarf Galago and the Mountain Dwarf Galago).  Other primates include the Vervet Monkey, Sykes Monkey, Black and White Colobus, Yellow Baboon, Grant’s Galago, Small-eared Galago, and greater Galago.  The national park is also among the top ten areas for bird conservation in Africa with over 250 bird species. The Udzungwa Mountains are also home to several Tanzanian endemic birds including Rufous Winged Sunbird and the Udzungwa Partridge. We spent two nights at the Udzungwa Forest Tented Camp enjoying the good food and watching the monkeys and birds while relaxing with a cold beer.  The camp sits on the border of Udzungwa Mountains National Park on lush green grounds overlooking the rainforest with excellent views of the forest canopy. The lodge is known locally as Hondo Hondo, meaning “hornbill” in Swahili, as a number of different hornbill species fly in over the forest edge every evening at sunset, and the valley echoes with their distinctive calls.

As we only had one full day here, we took a hike up to the Sanje Waterfall, the highest in Tanzania.  The waterfalls are a series of 3 cascades, the largest dropping 550 feet down the slopes of the Udzungwas.  The trail passes through the edge of village before entering the park and winding (sometimes steeply) through the thick rainforest.  Our park guides would tell us about the local trees and we stopped along the way to watch the red colobus monkeys playing in the canopy.  Upon reaching the top of the main waterfall, with spectacular views across the valley, the trail leveled out as we hiked to the last cascade.  Hot and sweaty we all jumped in the cold, clear water of the plunge pool for a quick swim.  Though we didn’t see many birds, the  half-day hike up Sanje is well worth the effort as you’ll experience a classic rainforest with trees festooned with mosses and lichens. Views from the Top of Sanje Falls At the end of our mainland safari, we continued on to Zanzibar for two nights to experience the exotic culture of Stone Town.  We said good bye to our excellent guide Steven as he dropped us at the ferry terminal for the 2-hour ride to Zanzibar across the Indian Ocean.

Zanzibar is described as a melting pot, with a blend of Arabic, African, Indian, and European heritages, creating a unique cultural mix on the island, rarely seen elsewhere.  Zanzibar’s history was greatly shaped by its geography, the prevailing winds of the region placing it directly on the Indian Ocean trade routes and making it accessible to both traders and colonists from Arabia, south Asia, the African mainland, and eventually the Europeans.  Swahili culture began on the east coast of Africa as a result of Bantu, Arabic, and Indian cultures mixing together to create something new.

Zanzibar has a long and complex history strongly influenced by trade, mainly in spices and slaves.  The island has been ruled by Arabs, Ottoman Sultans, and the British Empire.  In 1964, Zanzibar and the surrounding islands joined Tanganyika to form the United Republic of Tanzania. Zanzibar’s old quarter, known as Stone Town, is a fascinating maze of narrow streets and alleyways that lead past old houses and mosques, ornate palaces, and shops and bazaars.  A striking feature of many houses are the large, brass-studded doors with intricately carved frames.

We only had one full day on Zanizbar so following breakfast we were out exploring the maze of alleys and narrow streets.  We visited the Slave Market Museum, local markets, did a little shopping, grabbed some lunch at a local restaurant, afternoon coffee at the Zanzibar Coffee House, and dinner at the Forodhani Gardens.  This night food market is worth a visit with stalls lit with gas lanterns selling all sorts of local dishes. Our last night in Africa, we hopped aboard a dhow for a private sunset cruise.  We couldn’t have asked for a better way to end our safari.  Our dhow crew provided us with excellent snacks, beer, and wine as we sat on the upper deck under the sails to watch the sun set. Breakfast on the Rooftop Terrace I’ve been on safaris throughout Africa and this  journey was one of my favorites.  We saw few other tourists and experienced some of the diversity of this amazing country from untouched wilderness to sprawling cities, small villages and farms.  There was plenty of opportunity for activity on boat trips, bush walks, mountain hiking, swimming, and wandering the streets of Zanzibar.  Where possible I prefer driving through the countryside as you have time to absorb the changing landscapes and see a little of rural African life.

If you're interested in planning a similar safari, please contact us.  This itinerary was custom designed and not available as a scheduled departure.  We can easily add more nights at the various parks or include more hiking, walking, village visits, canoeing or bird watching.