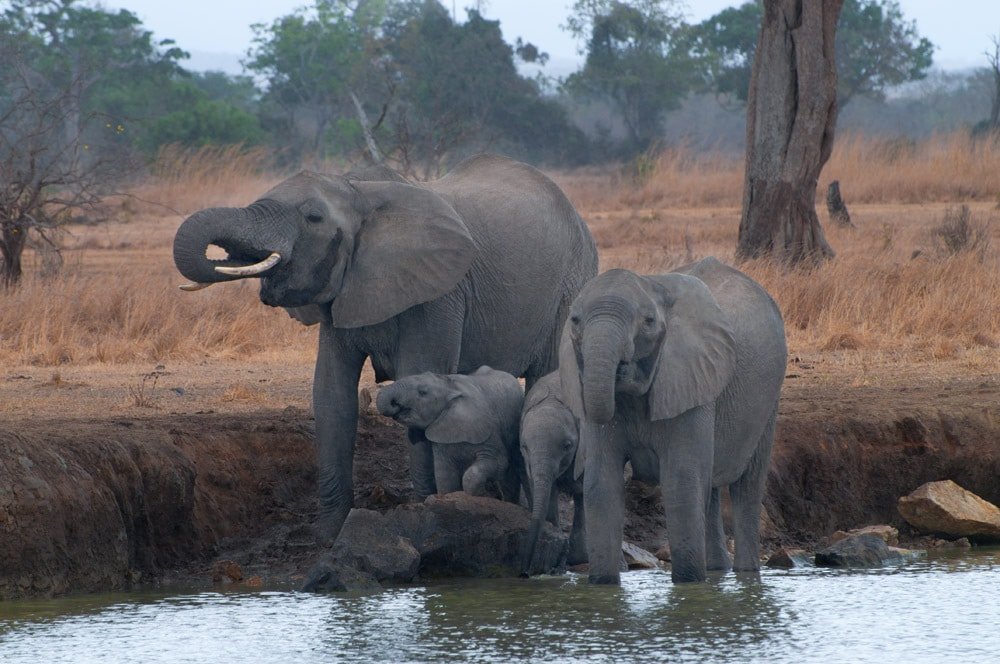 In September 2018 I hosted a safari into the remote and seldom visited game parks of southern Tanzania.  Throughout our journey, I was amazed at the diversity of landscapes, people, wildlife, and birds we encountered.  We covered long distances driving from the coast into central Tanzania.  Along the way we passed through small villages, hiked in lush rain forests to a spectacular 300-foot waterfall (and had a quick swim), drove over high mountain passes, walked in the bush and wandered local markets, lost our way in Zanzibar, encountered elephants, wild dogs, and loads of other wildlife, and fell asleep to the roaring of lions. Hippos in the Rufiji Our group of 6 guests, our guide and I spent 13 days visiting four outstanding parks and reserves: Selous Game Reserve, Mikumi, Ruaha, and Udzungwa Mountains National Parks.  This was the first African experience for 4 of our guests, and the first journey through southern Tanzania for the other two.  Our accommodation was a mix of small lodges and comfortable camping deep in the bush with excellent food and wonderful people. We encountered very few other tourists and had many wildlife experiences all to ourselves.  I’ve been on safaris throughout Africa and this itinerary is perfect for someone looking for a safari where you’ll encounter few tourists and see a slice of the “real” Africa (whatever that may be) of unspoiled wilderness, sprawling cities, villages and farmlands, and the wonderful people of Tanzania.

In fact, our days were packed with new sights that I’m writing this brief report in two parts.  Here I’ll describe our adventures in the Selous Game Reserve and Mikumi National Park and the next installment I’ll cover Ruaha, the Udzungwa Mountains, and Zanzibar. Upon our arrival in Dar es Salaam, we spent the night at the Slipway Hotel with superb views of the Indian Ocean.  It’s perfect location to begin a safari with plenty of restaurants, bank, and a supermarket for any last-minute supplies.  Early the next morning we loaded up the 4x4 Land Cruiser and headed south to the Selous Game Reserve.  Dar es Salaam is notorious for traffic but we were soon out of the city limits and driving through rural Tanzania.

The Selous Game Reserve, covering nearly 20,000 square miles and bigger than Switzerland, is Africa’s largest reserve and one of the largest protected areas on earth.  Besides the plentiful game and diverse habitats, the Selous sees far fewer visitors than the more famous Serengeti or Ngorongoro.  The northern region has been allocated for photographic safaris while the southern region is mainly a collection of hunting concessions. The Selous was established in 1922 and designated a UNESCO World Heritage Site in 1982.

The Great Rufiji River bisects the northern half of the reserve as it flows through acacia woodlands, swamps, and grassland.  The river sprawls out across the landscape into a series of lakes and deltas which ebb and flow with the rains.  The rich diversity of habitats found in the Selous supports an amazing array of birds and mammals.

Healthy populations of large mammals can be found in the Selous.  Cape buffalo numbers are estimated to be between 120,000-150,000 and the reserve’s 4,000 lions are probably the largest populations in Africa.  The is Selous also home to wildebeest, zebra, impala and significant herds of giraffe, greater kudu, waterbuck, bushbuck, Lichtenstein's hartebeest and eland. It is also one of the most important sanctuaries in Africa for the endangered African wild dog, sable and puku antelope.  Hyena and leopard are common while the rivers and lakes support huge numbers of hippos and crocs.  Historically, the Selous contained great herds of elephants but heavy poaching in recent years have reduced elephant numbers.

A massive hydroelectric dam is planned in the heart of the Selous and construction along the road into the reserve is well underway.   Crews are already widening the dirt road leading to the entrance gate and we passed bulldozers clearing the forest along the edge of the road.  Read more about the dam in another of my blog posts here. Village Market Along the Road Skittish Zebras at the Waterhole, Mikumi

We arrived at the Selous River Camp, a small, rustic lodge perched above the river, and spent the remainder of the afternoon boating on the Rufiji River.  It’s a big river with plenty of hippos and crocodiles and other wildlife.  Black and white colobus monkeys jumped through the treetops, weaver birds were busy weaving their nests, and carmine bee-eaters were excavating tunnels in the sand banks.  A few small villages are located along the river and we saw fisherman working their nets in the slow water near shore.

What’s a safari without a sundowner of gin and tonics?  Our guide pulled the boat onto an island in the middle of the river and with our drinks of choice we wandered and watched our first African sunset.  After a delicious dinner, our guide took us for a short walk through camp looking bushbabies as they search for food in the kitchen area.  Shining his light in the trees we could see the eyes of these nocturnal primates reflecting back at us.  It’s common to hear bushbabies but difficult to see without a strong light.

The next two days were spent exploring the lakes and forests of the Selous searching for wildlife.  With spectacular scenery and few tourists we felt as though we had the reserve to ourselves. The Selous has a good population of African wild dogs and we were lucky to encounter a pack only a few hundred yards from camp early one morning.  The sighting was quick as the pack ran by our vehicle but it’s always good to see one of Africa’s most endangered carnivores.

While we did see many giraffe, antelope, hippos and birds noticeably absent were elephants.  In our two days here we didn’t see a single one, perhaps a testament to the rampant poaching the Selous has suffered in recent decades. Departing camp early, we headed west across the Selous for the drive to Mikumi National Park. For our entire group, this was a fascinating day.  We passed through small villages and glimpsed the daily lives of rural Africans as they tended their fields or shopped at the local markets.  Our route took us over the Uluguru Mountains, with sweeping views across valleys and farmlands.  We dropped down the mountains, passed through the bustling city of Morogoro, and finally arrived at our lodge for the night, the Tan-Swiss.  Tomorrow we’ll spend the day in Mikumi National Park.

Mikumi National Park, covering over 1200 square miles is Tanzania’s fourth largest park.  Mikumi protects a combination of flat, open grasslands and wooded hills flanked by the Uluguru Mountains to the north and the Udzungwa Mountains to the south.  With a landscape of baobabs, black hardwood trees, and grassy plains, the park is home to a wide variety of game.  Established in 1964, the park was recently extended to the border of the Selous Game Reserve and wildlife frequently migrates between these two protected areas.

The open horizons and abundant wildlife of the Mkata Floodplain, the centerpiece of Mikumi, draw frequent comparisons to the more famous Serengeti Plains.  Wildebeest, impala, zebra, warthogs, vervet monkeys, yellow baboons, and buffalo are commonly seen in the grasslands as lions watch for prey from the tops of termite mounds.  Giraffe and elephant forage in the isolated acacia stands that fringe the Mkata River while hippos and crocodiles bask in the river and waterholes.  More than 400 bird species have been recorded, with such colorful common residents as the lilac-breasted roller, yellow-throated long claw and bateleur eagle.

We were visiting at the end of the dry season when water is scarce and wildlife must congregate around the few permanent water sources.  Our best game viewing was at a waterhole with a resident hippo family and a few crocodiles.  A steady stream of zebras, elephants, buffaloes, and antelopes would arrive and navigate the steep banking to access the water.  A few zebras were too skittish to drink.  A few would approach the banking but never got the nerve to actually go down for water.

Mikumi is a large park and we only had a day to explore.  We headed back to the lodge in the early afternoon for a swim in the pool.  Another early day tomorrow as we will head further west to the Ruaha National Park.