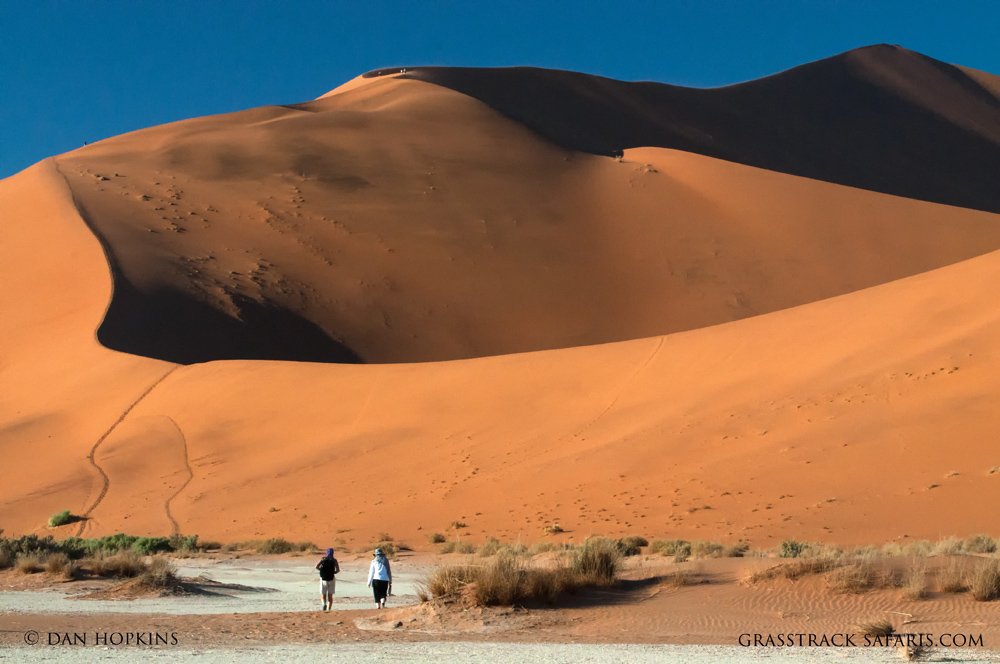 Namibia is one of Africa’s top safari destinations and for good reason.  Nearly twice the size of California but with only two million people, Namibia’s low population, dramatic landscapes, and unique wildlife create a feeling of solitude and wilderness.  A Namibia safari offers much more than the classic game drive.  Here you can leave the confines of your vehicle and enjoy an up-close and personal experience of this diverse country.  Hike the giant sand dunes, sea kayak with thousands of fur seals, or track big game on foot.  A journey to this stunning country in south west Africa can provide a lifetime of unforgettable experiences.  Here are my top 5. Can there be a more unforgettable experience than searching for a rhino…on foot?  All your senses are heightened and you can see, hear, smell and feel the bush.  You follow your guide as he deciphers the rhino’s tracks, alert to the direction of the wind and your footsteps as you move through the thick bush.  Then the guide points to where the rhino is resting.  You make out it’s rounded ears, long horn and finally the enormous bulk of the rhino’s body.  It has poor eyesight but excellent hearing and senses it’s being watched.  When it stands, you realize there is only a few trees and bushes separating you from this massive animal.  It looks straight at you for a moment before lumbering off to a new resting place.

Due to its forward-thinking conservation policies, Namibia has the largest population of black rhinos outside of protected areas in Africa.  Remember, these are wild rhinos, not animals living in a fenced enclosure.  Many of these rhinos are on communal land so if you join a tracking expedition you’ll not only experience the thrill of seeing a wild rhino but, your money also supports local communities. One of Namibia’s largest national parks, Etosha is a vast, 8600 sq mile reserve located in north of the country.  Situated on the north-west edge of the Kalahari, this is a land of endless horizons and shimmering mirages that form on the white expanse of the pan.  The centerpiece of the park is the Etosha Pan itself, the enormous remains of an ancient lake.  The pan is roughly 70 miles by 40 miles and covers nearly 25% of the national park area.

What makes this dry place so special is the presence of naturally occurring springs on the southern border of the pan.  Huge numbers of wildlife come to these springs, the only permanent water in the area.  Elephants, some of the biggest in Africa, migrate throughout the greater Etosha ecosystem and the endangered black rhino can be seen at the water holes, frequently at night.  Lions, leopards, giraffes, ostrich, zebras are common as are various antelopes including springbok, oryx, and an endemic of Etosha, the black-faced impala.

One of the highlights of a visit to Etosha is simply sitting quietly near a waterhole and watching the constant parade of animals as they come to drink.  Predators know this and will often hunt near these water sources.  If you’re lucky you may witness a pride of lions on the hunt. The Himba are a proud, traditional, semi-nomadic group living in the northwest of Namibia.  Closely related to the Herero people, they are one of the few groups in Namibia that still follow their traditional lifestyle and culture.  A visit to a village is a rare opportunity to interact with the Himba and learn about their culture and daily life.

Himba women are famous for their elaborate hair styles and decorations.  Dressed in leather skirts and wearing numerous bangles and bracelets, they apply a mixture of ocher powder and fat which gives their skin a reddish color.  Depending on their age and marital status, women will also apply the ocher and fat mixture to their hair, working it into long braids.

With your guide as a translator, you can visit their huts and see how the women prepare and apply the ocher.  This interaction goes both ways as the Himba are equally interested your customs and lives as you are of theirs.  The men and women of the village will also perform some traditional singing and dancing.  Himba villages are usually in remote areas so expect an exciting off road drive to the village. Namibia is famous for its surreal landscapes and none is more mesmerizing than the dunes of The Great Sand Sea.  This vast area in the southern Namib Desert contains some of the world’s highest sand dunes, many exceeding 900 feet in height.  The most accessible area is Sossusvlei, a clay pan set at the foot the massive dunes. The scenery around Sossusvlei is unforgettable with towering apricot-colored dunes etched on a cobalt sky and skeletons of long dead trees that once thrived in the pans at the base of the dunes.

A hike up Big Daddy, the highest dune in Sossusvlei, can be strenuous through the deep sand as you take one step up and seemingly slide down two.  Like any good hike, once you reach the top all fatigue is forgotten as the full extent of the Great Sand Sea is revealed:  an endless wave of dunes stretching to the horizon.  The most exciting way off the top is to run down the steep slip face of the dune.  Though it may take two hours to hike up, you’ll be down in about 10 minutes! Though an arid country, Namibia is home to a wide diversity of unique plants and animals.  One such population is the desert-adapted elephants that wander great distances between the river beds of north-western Namibia.  They are not a separate species of elephant, but a population that is behaviorally adapted to life in the desert.  In fact, only one other such population can be found, in the Sahara Desert regions of Mali.

Since the elephants move so frequently, searching for them is not necessarily a simple game drive.  You’ll start where they were last seen and then follow their tracks.  As you search for the elephants you’ll explore the dry river beds and learn about elephant ecology.  Elephants can dig deep wells in the sand which also makes the water available to other thirsty animals.  The search is exciting as you never know when you’ll find them or what they’ll be doing.  We found one herd of 15 animals sleeping, all of them lying in the shade. On another trip, we found a herd actively feeding with young calves.  We sat at the edge of the herd and spent time simply observing their behavior and marveling at how such huge creatures can survive in this harsh environment.