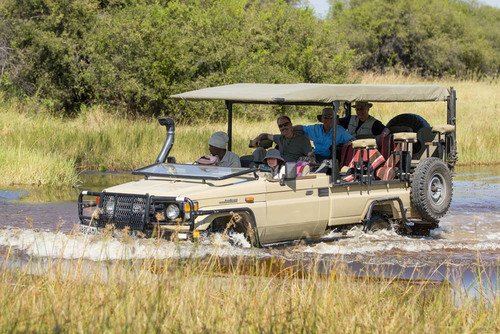 From May 11-23, 2016 a small group of Osher@Dartmouth members embarked on an extraordinary journey through Namibia, a country in south-western Africa.  The safari was sponsored by the Osher@Dartmouth Study/Travel Program based at Dartmouth College in Hanover, New Hampshire.  The trip was preceded by a class I taught covering all aspects of Namibia.  We learned about the geography and history of Namibia along with desert ecology and Namibia’s fascinating cultures.  We discussed Namibia’s enviable conservation track record and their successful Community Conservancy Program.  This program gives local communities a say in conservation policy and allows them to benefit from the wildlife living on their lands.  During our safari we learned directly from local people about these programs and the impact it’s having on their lives and conservation.  The goal of the pre-trip class was to enhance our guests’ safari experience and provide perspective for all the wonderful sights we would encounter. Our Osher@Dartmouth safari was a journey of discovery as we experienced some of the world’s most beautiful wild places, encountered wildlife spectacles and engaged with age-old authentic cultures.  Throughout the journey our highly trained guide provided detailed interpretation of the history of Namibia, geology of the landscape, and ecology of the abundant wildlife.  During our 13 day safari, we traveled the country in specialized safari vehicles and stayed in comfortable lodges. Along the way we learned about important wildlife conservation work, tracked desert rhinos with game rangers, visited a Himba settlement, kayaked with seals, and experienced the Great Sand Sea of the Namib Desert.

Upon arrival in the capital city of Windhoek we had a night at a comfy guesthouse to recover from the long flight.  The next morning we were up early and headed north for our first stop at the Africat Foundation.  This organization rehabilitates injured cheetahs and leopards then releases them back into the wild.  With our local guide, Daniel, we searched for leopards and cheetah on Africat’s Okonjima Nature Reserve.  We were rewarded with amazing, up-close views of these cats along with the giraffe, oryx, springbok and other wildlife that inhabits the reserve.  Our group was fortunate to have a private talk with Donna Hanssen, the Director of the AfriCat Carnivore Care and Information Center.  She gave us an in-depth talk on conservation in Namibia, the formidable challenges facing the big cats, and Africat’s role in conserving lions, cheetahs, and leopard in Namibia. We continued our journey north to the Etosha National Park to spend two nights at Anderssons Camp.  On our first night in camp a rare black rhino visited the camp’s waterhole. From the specially designed viewing blind we had extraordinary views of the rhino as it drank at the waterhole.  Etosha is an enormous park, famous for the Etosha Pan, a flat, 1800 mile² saline depression.  Numerous springs can be found along the edge of the pan where multitudes of game come to drink.  We spent the following day exploring the plains of Etosha and sat silently besides the numerous waterholes and watched the variety of game gingerly approach for their daily drink.  We were lucky to witness 2 rare black rhinos visit a waterhole in broad daylight!  Following dinner, Stuart Crawford, the general manager of Ongava Research Center gave us an in-depth presentation about rhino conservation in the Etosha region.

Now our journey turned south and we would cross the steep, mountainous escarpment and drop down to the Namib Desert and the Atlantic Ocean.  Along the way we spent a few hours visiting an authentic Himba village.  Access to the village was along rough, rocky roads but the journey was worth it.  The Himba are a proud, traditional, semi-nomadic group living in the northwest of Namibia.  They women are famous for their elaborate hair style and decorations.  They apply a mixture of ocher powder and fat which gives their skin a reddish color.  With our guide as a translator we learned about their daily habits, visited inside their huts and saw how they apply the ocher.  They even performed some singing and dancing for us!

The next two nights were spent at Grootberg Lodge, spectacularly perched high up in the mountains overlooking the broad valley of the Klip River.  Wildlife is present even on top of this high plateau.  Lions had been spotted near the lodge the day before so we had to have an escort to our chalets after dark.  Grootberg Lodge is owned by the ≠Khoadi-//Hôas Conservancy and they have successfully protected the desert-adapted black rhino.  In fact, Namibia has the largest population of black rhinos outside of protected areas in Africa.  Our group joined a local guide and two trackers and spent a morning tracking these rare animals on foot.  After a 4:30am departure and driving on rough tracks and off road (at one point our trackers were moving rocks so the guide could drive us up the valley) we set off with our trackers.  We hiked up hills and through ravines, always keeping up wind of where the trackers thought the rhinos were resting.  We eventually found the mother and her calf in a thicket of mopane scrub.  Though we kept a safe distance we were close enough that the mother gave us a warning snort.  It was an amazing experience to be so near these rare animals in a remote Namibian valley. The next morning we descended the escarpment and spent the day searching for herds of desert-adapted elephants that roam the dry river beds of Damaraland.  This is a particularly beautiful region of Namibia with high, red mountains, gravel plains, and strange vegetation.  After speaking with the local people, our guide found a herd of about 20 elephants grazing in a dry river bed.  We sat at the edge of the herd and spent time simply observing their behavior and marveling at how such huge creatures can survive in this harsh environment.  Before heading to Damaraland Camp for the night we visited Twyfelfontein, a UNESCO World Heritage Site famous for its abundant and ancient Bushmen rock engravings.

For breakfast the next morning the staff at Damaraland Camp treated us to a “bush breakfast”.  Tables were set on a hilltop and we sat enjoying fresh fruit, coffee, and eggs as the rising sun painted the surrounding mountains vivid reds and oranges.  Corbina, an employee at Damaraland Camp, joined us for breakfast and told her story about how the Camp and the Conservancy Program has changed her life.  She grew up in the area on a subsistence farm with little employment opportunity.  However, with the start of the Conservancy Program following Namibia’s independence, Damaraland Camp was built and she found work there.  Now she has a steady income, can send her kids to school, and can meet travelers from around the world. Hearing her story demonstrates how conservation can benefit the local communities who live in close proximity to wild lions, elephants, and rhinos.

We then departed Damaraland for the long drive to the Atlantic Ocean and the quirky little town of Swakopmund.  We drove past the Brandberg (highest peak in Namibia), past remote villages, and through the Namib Desert on seemingly endless, straight roads.  Swakopmund is an eclectic mix of colonial architecture, modern hotels, Namibian and German street names, German bookstores, coffee shops and craft markets.  We had some free time to explore the town with visits to the local history museum, snake park, aquarium or simply strolling along the beach.  The coast is home to large colonies of Cape fur seals and we spent a few hours kayaking along a colony near Walvis Bay.  We departed early to enjoy the calm waters before the strong coastal winds developed later in the morning.  Thousands of seals were hauled out on the sandy beach and the curious, younger pups would gather around our kayaks.  They would swim alongside our kayaks, nibble on the paddle, and splash us with their flippers.  There were so many seals you could hardly paddle the kayak without hitting a seal! That evening, following a traditional Namibian BBQ dinner, we set off for a night walk in the desert outside of Swakopmund to search for nocturnal animals of the Namib Desert.  Under a full moon, our guide, Steve Braine of Batis Birding Safaris, led us over the gravel plains and dunes while searching the ground with a powerful spotlight.  He could detect the eye reflections of spiders, scorpions, and geckos for a distance.  We saw mostly geckos, including a few rare species. On the last segment of our trip we headed back inland and then south east to the Great Sand Sea around Sossusvlei.  The gravel road took us across rocky plains, through canyons and over mountain passes.  This most frequently visited section of the massive 20,000 mile² Namib Naukluft National Park has become known as Sossusvlei, famous for its towering apricot colored sand dunes which can be reached by following the Tsauchab River valley. Sossusvlei itself is actually a clay pan set amidst these star shaped dunes which stand up to 900 feet above the surrounding plains, ranking them among the tallest dunes on earth.  We spent the morning hiking and exploring the massive dunes.  Once the heat started to build we enjoyed a late picnic breakfast in the shade of a giant camelthorn tree.

Our last day we drove back to Windhoek and had some free time to explore the city before our flight home.  Windhoek, Namibia’s capital, is nestled among rolling hills bounded by the Eros Mountains in the east, the Auas Mountains to the south and the Khomas Hochland in the west. It is a meeting place between Africa and Europe, the modern and the old. In the capital’s main street, well-preserved German colonial buildings are in sharp contrast with modern architectural styles, while Herero women in their traditional Victorian dresses mingle with executives dressed in the latest fashions.  Windhoek is a modern, clean city and we wandered the streets, walked through the Parliament Gardens, and visited a craft center.

On our last night in Namibia, Birgit Bekker (the sales director of our ground operator) joined us for sundowners on the roof of our hotel.  Birgit is a fourth generation Namibian of German descent and as we watched the sun set over hills of the Khonmas Hochland, she gave us some insight on life in Namibia, it’s history and politics, and conservation.

Our safari was a great mix of adventure, relaxation, stunning scenery and wildlife, and friendly and diverse people.  With our connections on the ground in Namibia we were able to give our guests some unique interaction with people diligently working behind the scenes to make Namibia such a spectacular destination.

If a trip to Namibia is on your bucket list, the time is now to pack your bags, grab your binoculars and go on safari!

GrassTrack Safaris is here to help you plan your African safari.  Contact us to begin your adventure of a lifetime!