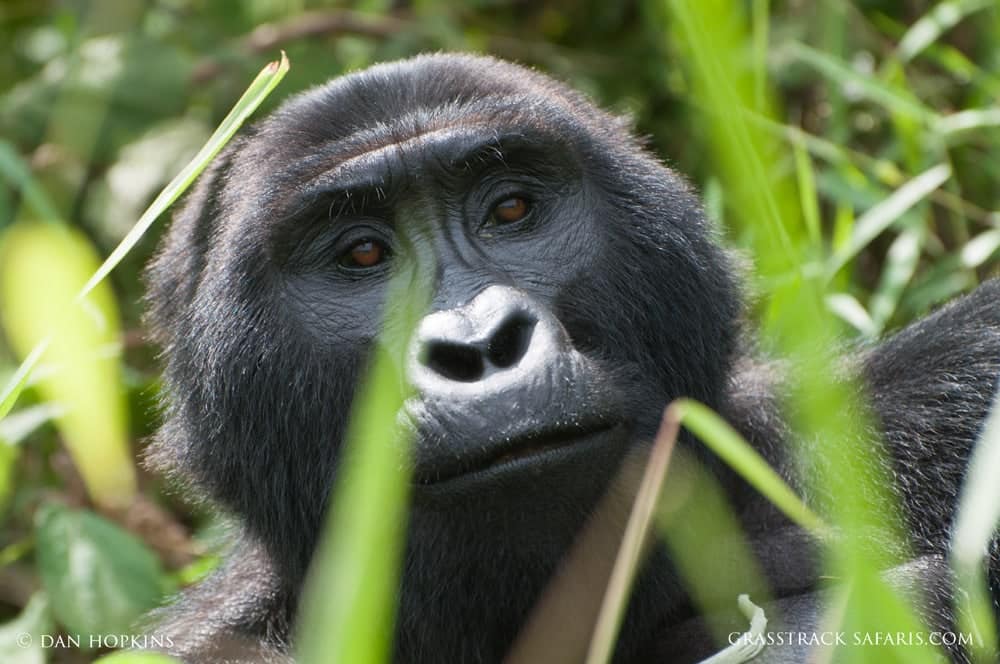 As in the previous mountain gorilla census in 2010, survey teams walked pre-determined “recces” (reconnaissance trails) ensuring a thorough coverage of all forest areas to sweep the Virunga Massif from the southwest to northeast and search for signs of gorillas, other key mammals, and illegal activities. When fresh gorilla signs were detected, the teams followed the gorilla trail to locate three recent night nest sites. At each of these nest sites, the teams collected fecal samples from nests. However, during this past census in 2015-2016, the survey effort was doubled by sweeping the Virunga Massif twice; first from October to December 2015 (57 days) and second from March to May 2016 (59 days).

A second sweep allows the team to find gorillas that were undetected during the first sweep and thus provides more reliable numbers of gorillas. Fecal samples were analyzed genetically to determine individual genotypes. The survey teams also collected data on signs and sightings of select mammals, such as elephants, and illegal activities, such as snares. While exercising caution due to the limitations of the study, there were no indications of declines in populations for the select mammals surveyed, including elephants, since 2010. The increase in mountain gorillas inhabiting the Virunga Massif is attributed to the effectiveness of conservation policies and strategies (notably regulated tourism), daily protection and veterinary interventions, intensive law enforcement, community conservation projects, and transboundary collaboration among government institutions and NGOs. These results are a testament to the tireless effort of the rangers and trackers who daily protect and monitor mountain gorillas and their habitat, including those that have been killed in the line of duty.

It is important to recognize the role of the communities that live in close proximity to these national parks who co-exist with mountain gorillas and contribute to conservation efforts. The two populations of mountain gorillas remain small and vulnerable to a potentially rapid decline due to factors such as their limited habitat, climate change, dependency on resources in the park by people, and the risk of disease transmission.  The Greater Virunga Transboundary Collaboration calls upon all conservation institutions and organizations and in fact all individuals, to join efforts to conserve mountain gorillas and their habitat for future generations.

The survey was conducted by the Protected Area Authorities of DRC, Rwanda, and Uganda (l’Institut Congolais pour la Conservation de la Nature), the Rwanda Development Board and the Uganda Wildlife Authority, respectively) under the transboundary framework of the Greater Virunga Transboundary Collaboration and supported by various partners and donors.

This was taken from a media release from The Greater Virunga Transboundary Collaboration: http://greatervirunga.org/ Trekking for mountain gorillas is an unforgettable wildlife experience.  GrassTrack  Safaris can arrange your journey to Uganda where you can search for the gorillas, track wild chimpanzees, and see the amazing landscapes, people, and wildlife of this fascinating country.  Take a look at our 10 day Classic Uganda Safari or our Murchison Falls Safari.   We can customize shorter safaris as Uganda is easily combined with Tanzania or other east African countries.