A 9-day Exploration of Zimbabwe's Parks & The Mighty Zambezi River

Africa's fourth largest river, the Zambezi River (meaning "Great River" in the Tonga dialect) begins as a trickle from a remote marsh in northwestern Zambia and flows over 1600 miles to the Indian Ocean.  During its journey to the sea, the Zambezi greatly increases in size and frequently changes its mood.  From boiling white-water below Victoria Falls to its lazy meandering between the escarpments of Mana Pools, the Zambezi evokes mystery and awe.

The Zambezi Wanderer Safari features classic bush camps, exciting walking safaris, and spectacular scenery. In recent years, Zimbabwe has seen a resurgence of traveler's looking for an authentic safari with few visitors.  Along with classic game drives, these parks offer a variety of land- and water-based activities.

On this nine day journey across northern Zimbabwe, you'll experience every mood of the great river and the abundant life its waters support.  Starting in Victoria Falls, your safari takes you to Hwange (Zimbabwe's largest national Park) and on to Mana Pools, a remote park on the banks of the Zambezi.  Your accommodation will be in small luxury lodges and tented camps located in Zimbabwe's remote wilderness. 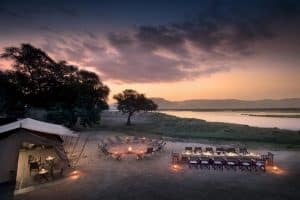 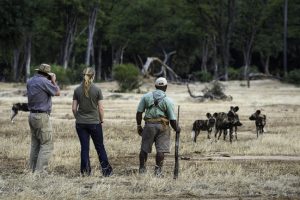 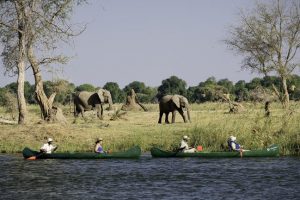 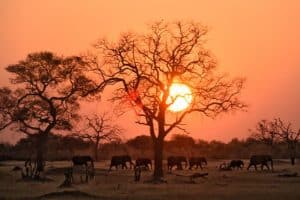 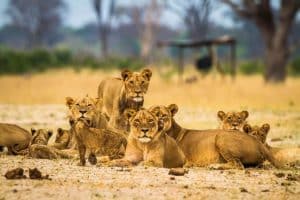 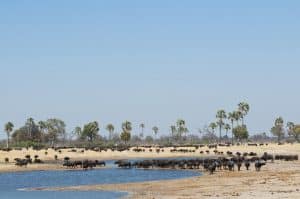 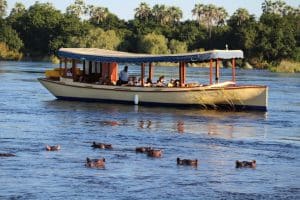 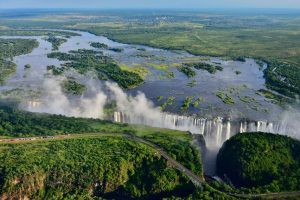 Your adventure begins at the magnificent Victoria Falls.  The largest curtain of falling water in the world, the Falls stretches over a mile with a drop of over 300 feet.  There's plenty to keep you busy in this bustling area.  Take a scenic flight, brave the whitewater on a rafting trip, enjoy a sunset cruise on the Zambezi, or simply stroll the easy paths through the rain forest along the edge of the Falls.


From Victoria Falls you'll head south to Hwange National Park, Zimbabwe's largest.  If you have dreamed of an Africa with expansive plains and wide horizons, where elephant and buffalo traipse in huge numbers towards waterholes and giraffe browse from flat topped acacias while a blazing sun sets behind them… you can find it in Hwange.  The diverse habitats here mean that it offers large numbers of desert adapted, plains and woodland animals. The famed elephant population is one of the largest in the world and it has plentiful predator populations such as lion, leopard and cheetah. Hwange also boasts one of Africa’s last strongholds of endangered African wild dogs.

Continue your safari with a flight from Hwange to one of Zimbabwe's most scenic parks, Mana Pools.  It’s hard not to be dramatic when describing the grand beauty of Mana Pools. This park in the north of Zimbabwe is a unique oasis often described as a ‘garden of Eden’. It is a remote gem that leaves you awed and humbled by the landscape, a landscape that feels both eternal and wonderfully alive. Mana Pools is a designated UNESCO world heritage site.

Mana is known for its immense bull elephants and the sight of an elephant standing upon its hind legs to stretch for the seedpods of a giant tree upon the floodplain has become iconic. Mana Pools is not all about elephants; you can expect to see large numbers of plains game and the predators that follow them. Large congregations of grazing animals can be seen on the floodplains and is excellent for African Wild Dogs.  Mana Pools is perfect for walking safaris or gliding down the Zambezi in a canoe.

We're happy to work with you to customize this safari to your interests and budget. Ilala Lodge is situated close to the Victoria Falls, Zimbabwe, shops, markets and nearby restaurants. Wild animals are often seen grazing the hotel lawns as the National Park borders the front of the property.

A variety of room types are offered at Ilala Lodge. The 73 rooms are made up of standard rooms, standard suites, deluxe rooms and executive suites, set out in four different wings of the lodge. All rooms have a private balcony, mini bar fridge, international plugs/ adaptors, wireless internet, in-room safe, tea/coffee self-service, air conditioning, overhead fans and satellite television. There is an à la carte restaurant which serves breakfast, lunch and dinner and offers a comprehensive wine list and cocktails. Dining is possible outside under the African night sky amidst the sound of the mighty waterfall. The beautifully decorated lounge and two swimming pool areas invite guests to unwind and take in the tropical gardens. Somalisa Expeditions Camp is set in the heart of Hwange National Park, known as the land of the giants for its big elephant herds., Nestled under an incredible grove of Acacias, along the edge of a seasonal flood plain, Somalisa Expeditions offers an authentic bush experience.

Six elegantly furnished canvas tents with en-suite bathrooms; flush toilet and romantic alfresco bush showers make up this camp. The décor echoes an era of old from colonial times to the ancient tribes of Africa telling the story from all corners of this magnificent continent.

Somalisa Expeditions’ main area includes a lounge and dining area on raised decking with an adjacent white sane campfire for relaxing evenings under the stars. The camp overlooks a small pool, which elephants have become habituated to drinking from. In addition, the water hole in front of camp is frequently used as a ‘mud-bath’ and a popular rendezvous for the elephants. Guests can enjoy some up close photographic opportunities with these majestic animals, most particularly in the dry season.  Breakfast, lunch, dinner, drinks incl. Zambezi Expeditions is a mobile safari located on the shore of the Lower Zambezi River with Mana Pools National Park, well known for its wildlife rich flood plains, the mighty Zambezi River and the magnificent views of the back drop of the Zambezi escarpment.

The camp consists of 6 twin bedded tents, with en-suite bathroom facilities that include flush toilets and an alfresco hot bucket shower. The camp gives luxury camping safaris a new definition by the virtue of its detailed furnishings and facilities which include 12 volt lighting and charging facilities for cameras. A well serviced mess tent with a dinning and seating area forms part of the camp. The wonderful Shona and Tonga staff will arrange brunch, tea and cake, and dinner. The camp can communicate by satellite phone in case of emergency.

Some of the wildlife you can expect to see is eland antelope, elephant, African wild dogs, water buck, and big herds of buffalo, kudu antelopes, lion and leopard. You will explore a rich aquatic life under a sky inhabited by fantastic bird species. Game drives along the flood plain in open 4 x 4 Land cruisers are one of the main highlights, taking you into the core of the wildlife scene that is abounding with a diversity of wildlife.  The camp is designed to give you access to the Zambezi river affording you canoeing excursions on the river, fishing either from the banks or off an island in the middle of the Zambezi river. The Camp opens from May to October.  Breakfast, lunch, dinner, drinks incl. As our Zambezi Wanderer is a tailor-made itinerary, there are no specific departure dates. Just let us know your potential travel dates and we will check on availability of all services.

Get in Touch with Us

Contact us with any questions and we'll get you started on your African adventure!