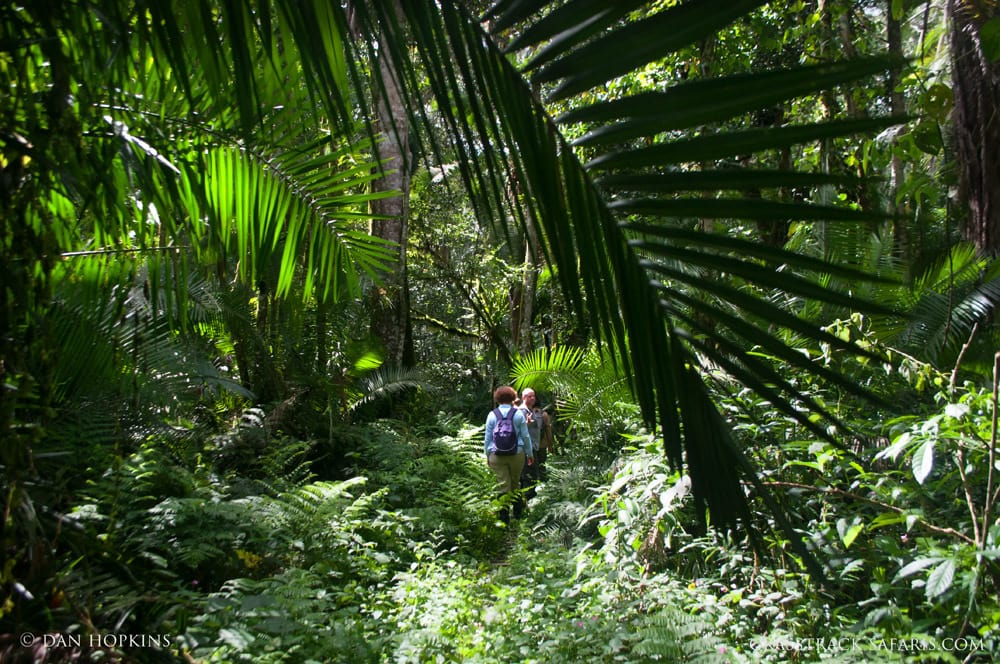 On our recent chimp trekking experience in Kibale National Park, Uganda, we spent an afternoon walking the paths of the forest with our guides and trackers.  The forest was thick with vegetation and bird song. The chimps were moving fast but we finally caught up with a small group feeding in a large fig tree.  Only one male was on the ground collecting figs.  He was very accommodating and we could get quite close as he sat on a log eating his figs.  The chimp kept glancing off into the forest and our guide whispered they were trespassing in another troop’s territory and hoping they wouldn’t be discovered.  This was my first encounter with a wild chimp.  It’s difficult to describe the feeling as I stood a few yards from him and made eye contact with an animal that shares 98% of my DNA.  Our afternoon searching for the chimps of Kibale was one of the highlights of our Uganda safari. Chimpanzees once had a wide distribution across Equatorial Africa, from southern Senegal across the forested belt north of the Congo River to western Uganda and western Tanzania. Current estimates for today’s population of wild chimps range from 150,000 to 250,000 individuals, however with a far more fragmented distribution. The Eastern Chimpanzee is still found in the wild in Uganda, Rwanda and western Tanzania. Approximately 5,000 chimpanzees call Uganda home.  The chimps are spread across various forests and national parks and can be tracked in their natural habitat at various conservation areas around Uganda. Where to Find Chimps in Uganda

Kibale Forest National Park, at 300 miles², is one of Uganda’s enchanting forested parks.  You can hike in the park for hours observing the drama of life in a rain forest.  The park contains pristine lowland tropical rain forest, montane forest, and areas of grassland and of swamp.  The forest is rich in wildlife with a diverse primate population, including red-tailed monkey, diademed monkey, olive baboon, black and white colobus, and about 1400 chimpanzees.  Larger mammals such as antelopes, buffalo, and giant forest hogs are difficult to see and rarely seen. The birdlife in the forest and grasslands is abundant, with almost 300 species.  Kibale is one of the best places in Africa for chimp trekking with very high success rates.  Join a half day trek with a guide and trackers (permit is $150) or spend a full day habituating other chimp groups.

Kyambura Gorge is on the eastern side of Queen Elizabeth National Park.  The steep sided gorge is about 10 miles long and about 330 feet deep.  A ribbon of thick forest sunken below the grasslands, Kyambura Gorge is home to a small group of habituated chimpanzees, many other primates and a huge variety of both forest and plains bird species. Trekking chimpanzees at Kyambura Gorge can be harder than the trekking in Kibale Forest National Park as the steep hike out can be difficult if you're not prepared.  Permits are $50.

Budongo Forest is located on the southern side of Murchinson Falls National Park. The 300 miles² forest reserve has a large variety of mammals and primate, including a large population of chimpanzees. Budongo Forest is great for birds, with more than 360 bird species recorded. The success of sighting the chimps is high, although it depends greatly on the fruiting seasons, with increased likelihood of good viewings of the chimps between the months of May and August.  The terrain encountered during the trek through the forest in search of the chimpanzees can be tough with some steep and long inclines. However, the beauty of the forest engulfs you entirely as you walk along the well-maintained paths listening to the huge variety of bird and animal calls.  Permits are $90. The dense forest and cloud cover create very dim light on the forest floor.  Be familiar with your camera and how to expose in low light.  I thought I knew my camera but the shutter locked and in the excitement of trying to take photos, I couldn’t figure out the correct settings.  Instead I took a few photos with my phone, put the camera away and simply enjoyed the moment.  Depending on the location, the chimps tend to spend more time high in the trees making good photography difficult.  Don’t let your camera prevent you from enjoying this experience!

Our trek was much less strenuous than our gorilla trek.  In Kibale there are decent paths and the trails were mostly flat.  In Kyambura you’ll be hiking down (and back up) the steep sides of the gorge. Wear decent hiking boots (they may get muddy), a long sleeve shirt and pants to protect from insects, and be prepared for rain.  Carry a day pack for rain gear and water.

On our Uganda itineraries, it’s easy to combine chimp trekking with gorilla trekking along with an opportunity to experience the iconic wildlife of Africa.  If you’re planning a safari to Uganda, consider joining a chimp trek.  Along with searching for mountain gorillas it’s a wildlife experience not to be missed.