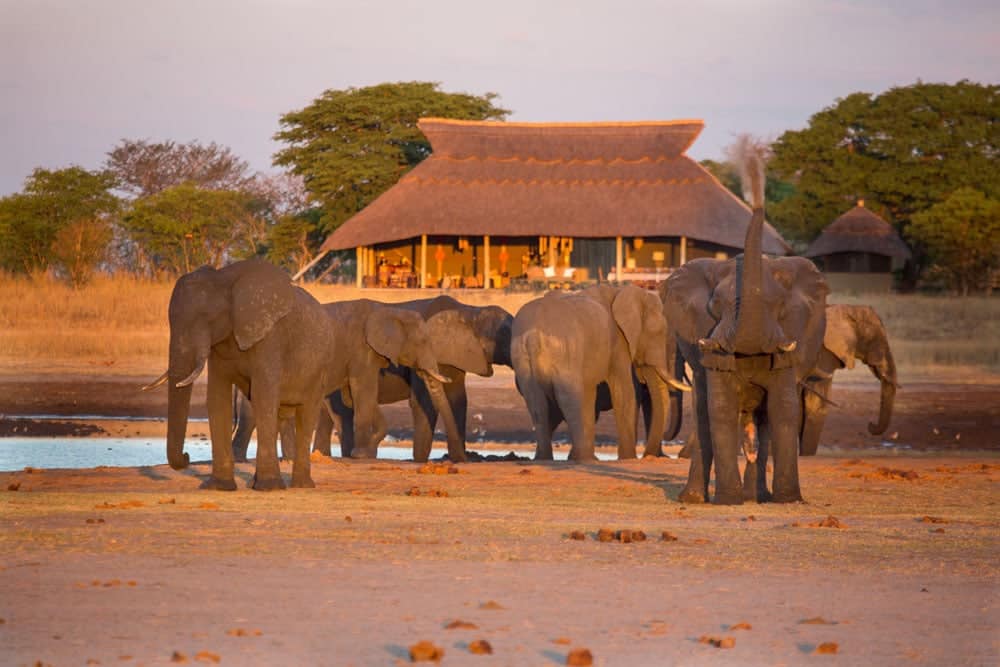 Camp Hwange is a classic safari camp situated on its own private concession deep in the Sinamatella area of Hwange National Park.  This small and intimate camp offers canvas and thatch bungalow accommodations of a unique style and perfect for guests who seek a true wilderness experience and a wonderful feeling of being immersed in the bush surrounded by game, wide open plains, and thick forests.  Since the camp is on a private concession, only Camp Hwange guests are allowed access ensuring an uncrowded and exclusive safari experience.  You can explore the bush on game drives, walking safaris, night drives, or just sitting quietly near a waterhole and enjoying the parade of animals coming to drink.

My Visit to Camp Hwange On my visit to Camp Hwange I was immediately struck by the spectacular location and the feeling I was truly deep in the African wilderness.  The camp is set on the edge of a teak forest overlooking an open grassland with a waterhole.  The entire staff was friendly and welcoming, and all the meals were excellent.  However, I’m more interested in experiencing the African bush than in details of food and décor.  Camp Hwange did not disappoint.  Zimbabwe is known for some of the best guides in Africa and the Camp Hwange guides were exceptional and extremely knowledgeable about all things Africa.

I spend three days at the camp with my guide Spike and he was extraordinary in every way.  During our game drives we had discussions ranging from conservation issues, insect ecology, astronomy, safety in the bush and the fine art of tracking wildlife.  We spent one morning tracking lions and another tracking an elephant, stopping for tea near a waterhole as the elephant took a mud bath.  On our game drives we explored the rocky outcrops, wide grasslands, and forests and we saw plenty of game.  On my last morning, Spike came to my tent at 5am (an hour earlier) to tell me some lions are roaring near camp.  We jumped in the vehicle and found a beautiful male lion roaring to his pride.  This was one of the best lion sightings I’ve had in Africa.  As we were departing for Victoria Falls we saw a pack of wild dogs slowly walking down the road.  A fitting end to a great stay at this wonderful camp! If you have dreamt of an Africa with expansive plains and wide horizons, where elephant and buffalo traipse in huge numbers towards waterholes and giraffe browse from flat topped acacias while a blazing sun sets behind them… you can find it in Hwange.

Hwange National Park is 5600 square miles, as big as Northern Ireland, making it the largest National Park in Zimbabwe and one of Africa’s great parks.  Hwange has always been renowned for its incredible diversity of wildlife.  You’ll find the large herbivores such as buffalo, eland, sable, giraffe, zebra, and wildebeest and a healthy population of lions, cheetahs, leopards and some rhinos.  Over 400 bird species have been recorded here.  However, the area is particularly famous for its population of elephant, some 44,000 strong, who dominate all the water sources during the dry season.  Beyond the sights and sounds, the feeling of Hwange is what will remain with you: awe and peace from spending time in a true, preserved wilderness. The main lodge is made up of a large lounge area and a beautiful restaurant where you will savor delicious dinners all tastefully decorated in an African atmosphere.   There is a large fire pit, the heart of safari life, where you can gather in the early mornings for hot coffee or in the evenings to share the day’s adventures.  The camp has 8 chalets with thatched roofing and canvas sides overlooking a permanent waterhole. Each spacious and airy thatched chalet is furnished with stylish simplicity, with en-suite bathroom facilities, walk-in showers, mosquito netting, and overhead fans. The chalets have their own large surrounding area at ground level with a complete vista of the waterhole so that in the luxury and privacy of your own space you may observe and truly appreciate the wonder of animals in Africa, in their natural habitat. Activities at Camp Hwange are centered on game drives and walks or a combination of the two. Game drives and walks take place on the private concession and there is also access to the Hwange National Park as a whole.  Walks are especially exciting as you’ll see many of the trees, plants, and smaller animals and birds not seen on a game drive. There’s nothing like following lion tracks in the early morning as you slowly make your way through the bush! Their professional licensed guides pride themselves on their knowledge of the ecology, natural history, and conservation.  Night drives are also exciting and you’ll see a different side of the bush when the nocturnal animals are active and predators start to hunt.  There are a number of waterholes in the area that attract lots of wildlife. Camp Hwange is a 4-hour drive from Victoria Falls: one hour on a very good tarred road, another hour on a dirt road to Sinamatella, and the final 2 hours on a game drive through Hwange National Park.  It's easy to combine a few nights at Camp Hwange with a few nights in another part of the park or combine with Victoria Falls, Mana Pools National Park, or Matopos National Park.  Take a look at our Zimbabwe Safaris to see what this fascinating country has to offer!