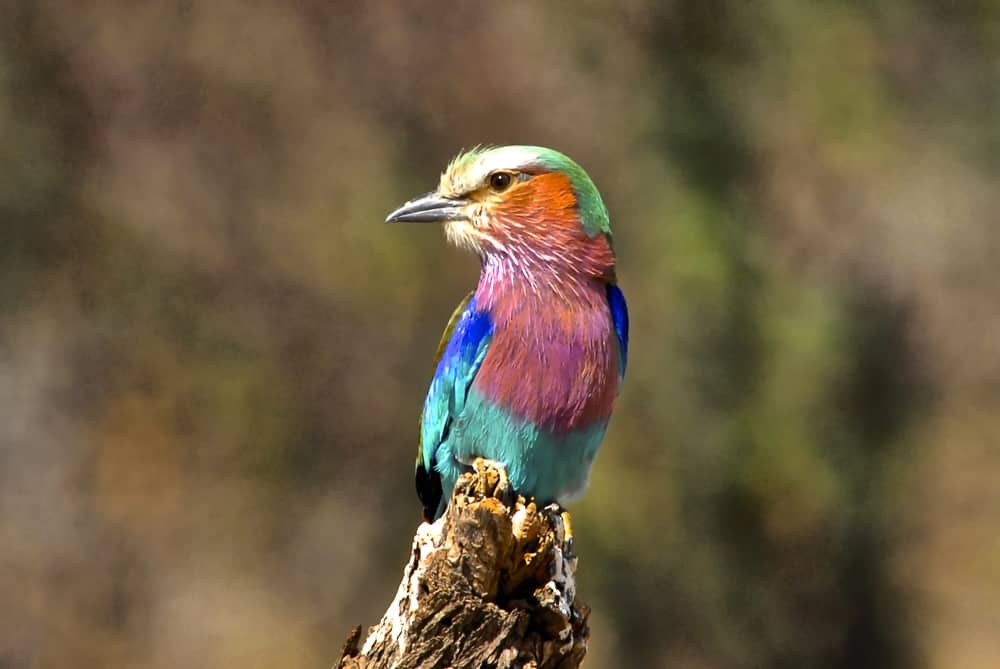 One of Africa’s most colorful and abundant birds, the beautiful lilac-breasted roller is commonly seen in game parks throughout eastern and southern Africa. The rainbow of colors this bird displays is truly stunning. Both males and females exhibit a range of pastel colors from the lilac breast, olive head, and rusty cheeks to vivid wings of turquoise and blue that flash in the sunlight as the bird flies over the grasslands.

There are four other roller species that are found in Africa (Purple, Lilac-throated, Broad-billed, and European) but it’s the abundant Lilac-breasted thrills so many visitors to Africa’s parks….

Since Lilac-breasted rollers mate for life, folklore surrounding these birds is associated with marriage and the bonds between two people. The Venda people of South Africa would use feathers as wedding bands while the Afrikaaners would sew feathers into wedding dresses. During a Zulu wedding, the couple would be tied together with feathers and if the knot was strong enough the wedding could proceed. Lilac-breasted rollers prefer grassland or savanna habitat with open woodlands or scattered trees and shrubs for nest building and hunting perches. These birds are common throught eastern and southern Africa but are absent from the Namib Desert and coast of southwestern Africa. They range from sea level to elevations of 6,000 feet. Lilac-breasted rollers don’t migrate but can be nomadic as they search for food, water, and nesting sites. Lilac-breasted rollers are carnivorous and their diet consists of a wide range of prey including insects, spiders, scorpions, millipedes, centipedes, lizards and other small vertebrates. They perch on high points like trees or telephone poles then swoop down upon their prey. They’ll swallow smaller prey on the ground but will bring larger prey back to their perch and beat it against the tree until it is dead. Lilac-breasted rollers take advantage of frequent bush fires and hunt along the advancing edge of the fire to capture prey escaping from the flames.

Rollers are monogamous and thought to breed for life. During a courtship flight, the birds fly up steeply and almost stall. With wings closed, they dive down to gain speed and level off, then open the wings and roll from side to side. This courtship display gives them their common name of “roller”.

Lilac-breasted rollers are cavity nesting birds. They will built a nest in a natural tree hole or a cavity excavated by woodpeckers or kingfishers, usually about 15-20 feet above the ground. Occasionally they will nest in old termite mounds. The nest is a simple flat pad made of grass and is aggressively defended by both male and females.
Typically, lilac-breasted rollers will lay 2-4 eggs per season. Both the male and female will alternate incubating the eggs for 22-24 days. Both parents will also share in feeding the altricial chicks for another 19-20 days.

Rollers are abundant and commonly seen in nearly all the famous parks across east and southern Africa. They are relatively unafraid when game vehicles approach and it’s often easy to get close-up views of this spectacular bird.