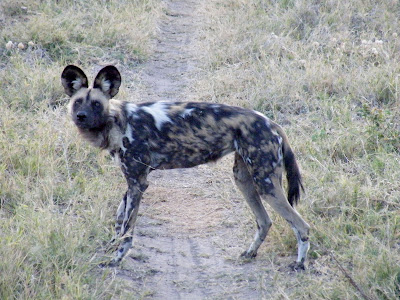 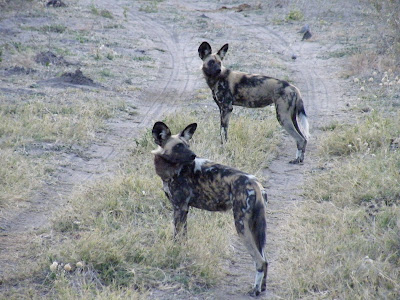 We thought we take a break from our safari travelogue and post an article about the natural history, conservation, and our sightings of African wild dogs, also known as painted dogs.  They are such fascinating and rare animals they deserve a post of their own.

The African wild dog was once a common predator throughout Africa.  Unfortunately wild dog populations have plummeted and they have now become the second most endangered carnivore on the continent.  Its success as a predator and its cooperative behavior have not been enough to prevent the effects of habitat fragmentation, conflict with humans, and death by road kill and disease (since they are related to canids, it is thought wild dogs are susceptible to diseases carried by domestic dogs).   African wild dogs are thought to number no more than 3,000-5,000 individuals.

Historically wild dogs once roamed the savanna of northern, eastern, and southern Africa.  Currently wild dogs are found in Tanzania, Zambia, Botswana, Namibia and South Africa and most likely only in protected areas or on their periphery.  The extensive wilderness of northern Botswana offers the best chance on the continent to see wild dogs.  Their territory covers about 200 sq miles and so they require huge tracks of land for hunting and raising pups.  Chobe, Moremi, and the Okavango Delta provide a vast, contiguous stretch of habitat which supports a healthy population.

The African wild dog is a beautiful animal with large, rounded ears and a mottled coat of black, white, and tan.  Their Latin name, Lycaon pictus, means “painted wolf”.  The coat pattern is unique among individuals and the white tail tip and tan forehead are the only features common to all wild dogs.

They stand about 30 inches and weigh from 55-70 lbs.   Pack sizes are generally around twenty dogs though this can range from less than ten to well over twenty.  Each pack is lead by a dominant, breeding pair of adults.  Only the alpha pair breeds and the other pack members assist in hunting and raising the litter.  Unusual among social mammals, it is the females that emigrate from the natal pack while the males remain behind.  Unlike their canid relatives, the pack members display little aggression toward each other.  Wild dogs are cooperative hunters and share food after a kill.  Their main prey are medium sized antelopes like the impala, lechwe or reedbuck.  When a victim is selected the dogs will chase down the prey until it reaches exhaustion.  Wild dogs aren’t faster than antelopes, they simply have more endurance.  The prey is ripped apart while still alive and the dogs gorge on the entrails and meat.  Wild dogs usually hunt in the early evening or early morning.  They are efficient and successful hunters with 80% of hunts ending in a kill.  Compare this to lions, whose hunting success rate is only around 30% and you have to wonder who Africa’s top predator really is! 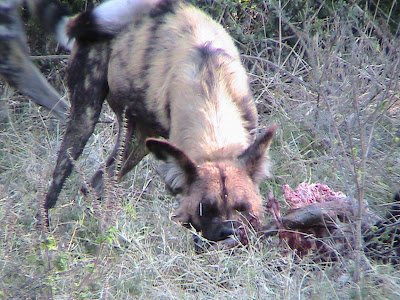 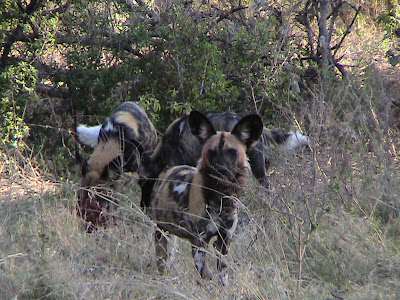 Since African wild dogs roam so widely it is a lucky sight to see a pack, let alone a kill.  On our 2009 safari in the Moremi we came very close to witnessing a kill.  We didn’t see the kill but found a pack very soon after they had taken down an impala.  Our group left the campsite along the Kwai River around sunrise.  After watching a lioness for few minutes we continued on and came upon a few vehicles gathered along the roadside watching something.  As we pulled up we could seethe dogs were in the process of ripping apart an impala (watch a video clip at the bottom of this page).  Some dogs sat off to the side gnawing bones while others, with muzzles stained red from blood, continued feeding at the carcass.  As the dogs fed or when a dog approached the kill, the pack would emit an excited twittering sound (near the end of the video clip below the pups make the sound when running to the adult dog).  This pack had a new litter of about 8 pups.  We were fortunate to see not only the dogs, and a recent kill but the pups as well.  By now the feeding frenzy had died down and the dogs started to disperse.  The pups were playing in the sun under the careful watch of the adults.  Finally, in response to some cue unknown to us, the dogs trotted off into the bush.

We would see another pack in Savuti as they prepared for the evening hunt but to see a fresh kill and the pups was truly a lucky and unforgettable sight.

My first wild dog sighting was in the Ruaha National Park, Tanzania on a self-drive safari with John and two other friends.  Our group had training in ecology and mammology and knowing how rare the dogs were, seeing them was a top priority.   Upon arrival at Ruaha we immediately asked the rangers if wild dogs were in the area.  On our map he pointed where he thought a den was located and to increase our chances we should be out searching in the late afternoon.  After a few hours of driving the sun was sinking below the hills and we thought we’d missed our chance at seeing wild dogs.  In the last light, someone yelled “hyena!”.  It’s not a dog, but worth a look.  The hyena didn’t look like a hyena, but in fact was a wild dog running straight toward us.  We turned the engine off and waited.  The dog came around a bush, saw us, stopped for a few seconds and continued on.  A few seconds later another dog appeared, then another, and another.  We counted 12 dogs, either heading out to hunt or returning to the den.  It was a special sighting for us since there was no other groups nearby and the experience felt like it was ours alone.

Sadly, if you want to see wild painted dogs you should plan a trip to Africa soon.  Our safaris visit one of their last strongholds in northern Botswana so the chances are good you’ll see a pack.  There are a number of organizations dedicated to the conservation of wild dogs.  To learn more, visit these sites:

The Behavior Guide to African Mammals